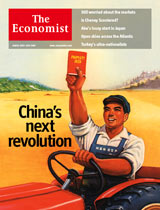 It’s easy to become so engrossed in the genius of blogs like Antony‘s, adliterate or Russell Davies‘ that you start thinking that the mainstream press can’t contribute to the debate about the changing consumer (the change in the media power relationship).

But there’s a great article in this week’s Economist about exactly that. And it’s a very interesting take on it.

Starting with the premise that what Google is really doing is selling information about user’s preferences and interests in a very niche way, the article “They want their share”, looks at start ups which are looking to allow users to perform this swap themselves. The idea being that consumers will store their preferences (browsing history, search history, emails) and swap them for money at the point at which advertiser’s can speak to them. There’s even the (faintly ridiculous) suggestion that consumers would opt in to bulk email (aka SPAM) on a paid for basis.

I’ve heard similar predictions from Ross Sleight and other’s under the heading “attenioneering” being what brands will need to think about as media ownership fragments.

Some of this stuff seems pie in the sky but the underlying point is pretty exciting: