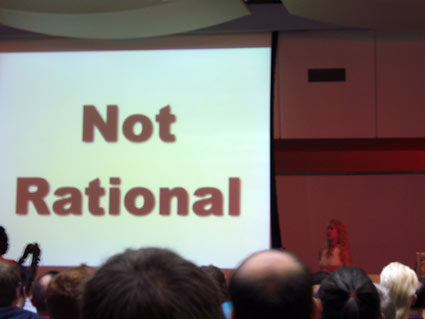 On Friday 6 April, Kathy Sierra posted a follow-up on the ‘death threats’ nightmare that began on 26 March when she was forced to cancel an appearance at the O’Reilly ETech conference. Here is the original post related to that.

As a high profile blogger, Sierra had been subject to criticism, including the occasional abusive post. The crucial difference was when the posts became overtly misogynist and began to threaten violence.

Similar posts threatened Maryam Scoble, and Sierra became so concerned for her own safety that the police became involved.

At first it appeared that several bloggers who had been critics of Sierra’s were responsible for the offensive comments. It later turned out that this blame was wrongly assigned with the offensive posts the work of still anonymous hackers, looking to stir up trouble between Sierra and her opponents.

One of those initially blamed Chris Locke, released a joint statement with Sierra on Monday 1 April to clarify some of this.

What is truly truly sad about all of this, which is highlighted in Sierra’s post on Friday is that she is now afraid to continue either her speaking engagements or her (fantastic) blog.

This is a talented author, speaker and incredibly insightful thinker. Sierra is not a politician or a pundit, she is advocate for a modern approach to brands and consumers in the electronic age.

How can we have rewarded her open, sharing and intelligent input with nothing less than an open-air mugging?

And, like all violent crime we leave a victim who will constantly be on the look out for the next attack. Her post from immediately after the incident said:

The whole episode has perhaps left Sierra over-sensitised to misogny and hate, although it would be difficult not see those characteristics, particularly, lurking in the background of much of the IT industry.

Most galling is that there doesn’t seem to be a single thing we can do about it. No-one is defending the posts themselves because they were essentially acts of vandalism. This is not a free speech debate. This is not  a question of a blogging code of conduct.

The only answer can  be a zero-tolerance for abusive content and abusive motive. And if the hackers can be found, they should be treated no differently than if the threats had been sent by post or written on the outside of Sierra’s house.

Apart from that, all we can do is pray that Sierra has the courage to go on and does not loose faith in power of people to do good and help each other, and the role the web can play in enabling that.

1 thought on “Passion and hatred”