Last week at Mix, Microsoft announced a huge raft of new products. Attendees describe the wave upon wave of releases as somewhat disorientating, overwhelming in its sheer volume so that some of key details may have been overlooked by much of the audience. Certainly many of the developments (like the relationship with Hugh McLeod) point to a corporation which is reassessing its position with consumers and customers.

In particular on both, amid the release of Silverlight and Silverlight Streaming Services, as well as the more open Live Services Platform, it seems that much of the audience missed the annoucment of a 50k CLR. For 50k more download than the core Silverlight plugin, users can download a Common Language Runtime (CLR), enabling developers to build multiplatform objects in any supported language (compiled and uncompiled): C#, Java, Ruby and Python. This brings the promise of multi-platform computing which has been talked about for the last ten years to reality (if beta reality).

So while the delegates were talking about whether Silverlight was or wasn’t a “flash killer”, what was really being announced was the death of Java. Or, to put it another way, .net is now a mac development platform. 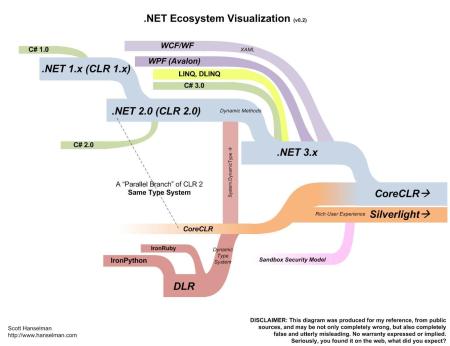