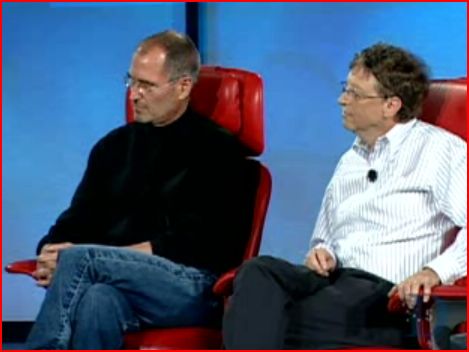 When it comes to technology innovation, it’s interesting to hear some people still talk about a “five-year plan”. After all, YouTube went from zero to £1.65bn in 18 months. Google only lost their beta tag 7 years ago. Paradigms can change literally overnight.

In this fascinating interview, Jobs and Gates reveal that they’ve not got a clear view five years out, although they both broadly are expecting hardware to continue to evolve in a fairly linear way. Gates is sticking to his software-only stance (noting the exception of the X-box, the new and very exciting surface computing – although I’m not sure why that couldn’t be a pure software play for Microsoft – , a new meeting conference hardware called round table, and of course the ill-fated Zune).

While Jobs is clearly still in the hardware+software mode, he sees software as the driver, simply noting that he will continue to make the “nice boxes”. He sees the ipod’s dominance for example as a result of great software. And indeed the majority of the criticism of the Zune has been software related, and that certainly would seem to be the biggest barrier to adoption.

Both believe that users will continue to have multiple devices. Basically this means a laptop (or tablet), a mobile phone (or “post pc” device as Jobs calls it, pesumably to make the iPhone even more significant) and home entertainment equipment which will include what’s been done with media centre but will also, surely, extend to include ubiquitous computing device like the Surfaces product mentioned above.

As well as 3D visual interfaces, which have not yet lived up to their promise, Gates identified other changes in input method as big driver. In fact he talked about several different input methods – the multi-touch approach that Jeff Haan has been on about for years and appears in Surfaces and on the iPhone; what I would call passive video input – again on Surfaces, this is cameras which map how devices relate to each other (well worth watching the demo for that), and possibly in whatever this conference tool is to identify who’s speaking or presenting; and finally a general nod in the direction of natural language input.

Jobs was very tight lipped about innovation although dropped a few hints about improving .mac, most likely in some sort of 2.0, SNS kind of direction. Hugh MacLeod also spots a vieled comment from Gates about re-entering the internet space with renewed vigour from Gates. I’d guess he’s refering the Live Services platform but who knows, perhaps there’s something else about to be launched. I wonder if Hugh knows more than he’s letting on.

Both men seemed suprisingly oblivious to the threat posed by SaaS to their desktop operating systems, with both citing a mix of local applications with cloud services in support.

Interestingly, Jobs also argued that a turning point for Apple’s corporate strategy was when they realised that their success was not contingent on Microsoft’s failure, although his attempt to characterise the “Mac vs PC” advertising as not attacking Microsoft was rather unsuccessful.

1 thought on “The Bill and Steve show”