I’ve been reading the fantastic The Machine that Changed the World. The book was first published in 1990 by a team of economists from MIT in response to the whacking which American car producers were receiving from the Japanese. 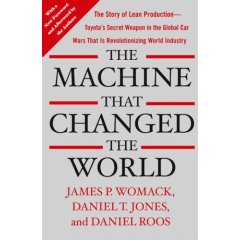 It had been widely assumed that the system the Japanese were using to simultaneously deliver higher productivity, higher quality, quicker plant turn around, faster product development and greater innovation were deeply rooted in particularities of Japanese culture and ethos. Anyone who has visited Japan will know that the culture is dramatically different from the west with significantly greater emphasis placed on the role of the group and social responsibility. Weren’t these the factors that were allowing the Japanese to beat the US at their own game – large scale car production as it had originally been devised by Henry Ford in the 20s?

In fact, Womack et al. establish through detailed investigation of the Toyota Production System (TPS), as well as detailed on-site analysis of many US, European and Japanese car plants, that the new ways to produce automobiles on a large scale – dubbed “lean production” – are in fact simply better than the “mass production” techniques we are all taught to believe are best-in-class. Whatsmore they can  be implemented anywhere. The proof being the American owned and Japanese owned lean-production plants which now exist in the US and Europe.

Unlike mass production, lean production returns responsibility for the smooth running of the factory to the staff that actually work on the production line, it places an emphasis on immediately removing all defects and minimising waste, involves customers in the design process and it is based on the understanding that it is not always best to try and make all project decisions in advance. It is a revolutionay way to look at processes and governance.

I strongly recommend the book which covers all of this in a very digestible manner and is very engagingly written too.

I’ve been introduced to all of this by the adaption of these principles to software engineering (the Agile Movement) at Conchango, and so I’m going to pick up my points on this subject on my new, and not very shiny blog over there. There’s a lot to talk about and this book review will be the only post I put on both blogs. I’m intending to look both at the key lean principles but also about how they could be implemented in all sorts of places in today’s ultra-competitive and ultra-open markets.

And if you’re thinking this is all about cars. Think again. Here a story about the Wii whipping the PS3. The PS3 is (despite being Japanese) a classic product cycle development. Wii is innovation. Innovation requires lean thinking.