Blah, blah, blah… blazing performance. Scanning through Apple’s marketing material for the new PC version of Safari, I assumed that this was so much of the Jobs hyperbole around any of  its new products.

Admittedly iTunes does live up to many of the promises that were made of it, but it’s a little clunky and slow at times. And a browser, from Apple, surely they’ve got a lot of catching up to do? And, remember how everyone used to claim that Firefox was faster than IE, and maybe it is once you get it loaded, but unfortunately it took two minutes to fire it up.

Anyway, so I installed the public beta to give the tires a bit of a kicking. And there is only one word for it… Wow.

It’s like the first time you got to use a leased line or ADSL. There’s a real appreciable difference in speed which makes the whole experience more satisfying. It’s even quick on Windows Live Hotmail, which takes so long to load on IE that there’s a special loading screen. 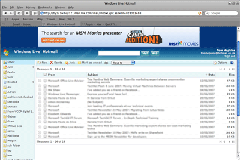 So, what’s the real strategy here? I suppose you could just say that Apple wants to be in front of PC users, to get the default home page but it seems like a lot of effort to go to for that purpose. Microsoft stopped development of IE on the mac, presumably because the reward didn’t justify the cost.

And number 2 points at another startling conclusion. That the iPhone will be able to run all SaaS products as well as a desktop. Not like the cut down browsers in most of our phones, the iPhone will execute all the scripts and AJAX functionality to make site work asynchronously and without page refresh on a mobile phone.