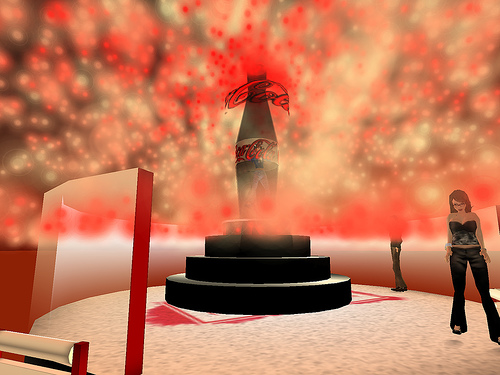 PSFK highlights once again that while the hype around Second Life is alive and well, the community itself certainly isn’t. And in even worse health are the advertisers who are flailing away with their empty Second Life spaces. As Wired points out, users simply aren’t finding the virtual reality world interesting enough: 85% of avatars are abandoned (I left mine in AKQA’s reception). And of those 15% that do hang around, they’re definitely not there for Visa’s Island (Visa couldn’t even come up with a good reason to go there) or Coke’s ‘Virtual Thirst Pavillion’.

Wired quotes stats where ‘Sexy Beach’, a popular area with sex shops, dancing and ‘no-strings hookups’ scores a metric of 133,000. Coke gets 27.

Joseph Jaffe, author of ‘Life after the 30 second spot’ is responsible for Coke’s presence. Despite terrible traffic figures, he says:

“The learning is now. You are a pioneer, and with that comes first-mover advantage”

Wow, I think I’ve just been teleported myself. This time back to 1999. It may not be about ‘exposure’ any more, perhaps ‘engagement’ is more important. But that’s still got to be with more than 20 people. Perhaps the 30 second spot isn’t all that dead after all.

Of course, the empty warehouses of Second Life (a little reminiscent of Canary Wharf at the weekend as Antony points out) are a sign of brand managers desperate not to be left behind like they were with Social networks and the rest.

But of course, with virtually infinite space, it’s about what you’re saying not how loud you can shout. “My Island is bigger than yours” doesn’t really cut it.

And now we must brace ourselves for the ill-thought-through Facebook invasion.