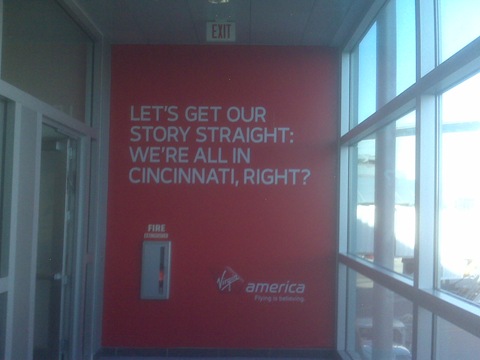 The User Experience ‘track’ at Mix included some of the world’s most enlighted thinkers on creating business value from powerful user experiences. Alongside Conchango‘s very own Paul Dawson, were Experience Matter’s Lou Carbone (author of Clued In which I discussed here) and Dan Roam.

Aside from a broad consensus about the importance of actively managing experience, two key themes emerged – airlines and toilets.

Toilets in particular were a big part of Paul’s presentation (he actually used them to discuss scenario analysis but you’ll have to watch the presentation to find out more about that), and form a sizeable chunk of Clued In, as he examines the experience ‘clues’ that hotels generate by the little touches, such as folding over the base of the toilet roll (it’s a lot more interesting than I’ve just made it sound of course!).

Airlines regularly emerge as either heroes or villains of the experience question. Paul talked at length about the positive in-flight (and in-lounge) experience that Virgin Atlantic fosters and what customers say about it. Lou Carbone, for his part, hates (and no that really isn’t too strong a word) Southwestern Airlines in the states, making the point that he has a gold card from them for ‘loyalty’ so they’re unlikely to realise he’s going around telling everyone how terrible they are.

Lou Carbone tells a story of being denied a glass of water whilst sitting in the back of a Southwestern flight, and the venom with which he was treated by the staff while they were doing it.

Toilets are intimate place, where small details matter. Airlines feel like they should design the experience because they do theoretically control it so completely.

Perhaps fittingly, on my way home from the conference, I have found a brilliantly managed brand experience. You’ll be pleased to know, on an airline, not a toilet, and in particular when taking a short connecting flight inside the states with Virgin America.

The ‘clues’ start early. With this new airline, the in-plane the announcement before you take off is given by the pilot from the main passenger cabin rather than from the cockpit over the PA system – that’s a pretty strong signal. And then, in our bit of the cabin, they didn’t have the safety video so one of team did it manually, but because we were heading to Vegas, he did it Elvis style, glasses, cape and all.

If fact, it seems to carry across to all the staff. They’re not necessarily any faster than BA or whoever, but it’s really obvious in the way they go about their jobs that they really want the airline to succeed and that they believe that if they make people feel great about the airline and recommend it, that can make the difference. The pilot announced after landing – ‘if you’ve got a mobile phone, feel free to make a call now’. Amazing how refreshing it is to be told about things you can do on a plane. Then you get off in Las Vegas and you see the sign at the top of the page!

And, when things go a bit wrong – as they did with  a close connection I had yesterday – the staff really went the extra mile, with a VA guy spending 10 minutes helping me transfer to a BA flight.

The upshot of course is that I’ll recommend VA and, I’ll seek them out when I’m next travelling in the states. You never know. I may even write a blog post about it