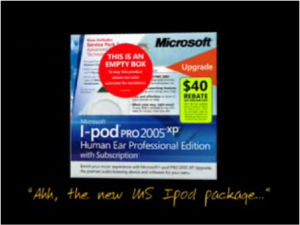 I’ve commented before a couple of times that Microsoft could release the MacBook or iPod and everyone would declare it a dud. The products that the blue monster releases which are good (Messenger, Office, Visio, the server products etc) are ignored while the company’s detractors happily pick apart shortfalls of products like the Zune, or Windows Live Hotmail.

Possibly the best expression of this I’ve ever read is this article. Read the body first and then read comment 13!

So, it appears someone at Microsoft has had the same idea. Unfortunately they had it about Vista. Now the best I think I could say about Vista is that it has a couple of cool interface elements and features. Certainly it’s miles behind mac on ease of use, and considerably behind XP on stability etc. Is it a complete bag of spanners? Well of course not, most of the time…. But it needs to be amazing if it wants to be seen as amazing (like Office 2007 is).

Microsoft has been telling us a variation of that story for the last couple of years. I’d have a lot more faith in it if Gates himself hadn’t laughed at the product. In the Mojave Experiment, the team attempt to prove the product is actually pretty cool (it’s just had a pasting in the press) by running test user groups on Vista but telling the users it’s a new release (called Mojave).

Apart from sounding like a misunderstood teenager, what’s wrong with this picture?

The really careless thing about the marketing campaign (which appears to showcase about 55 users, although some of their contributions are only a few words):

Ultimately, I bet the top three complaints about Vista are

The user experience is not built out of a list of features. It’s a much more complex sum than that: everytime you can’t work out how to use it, or it jams, or it crashes, or it just goes off and does something weird, deduct one point. Everytime you find a new thing you love, or something is really obvious, or it confounds expecatations (like resuming quickly from sleep, leaving the USB powered even when switched off), add a point.

On that basis Vista simply doesn’t get far enough away from zero.

1 thought on “Apples and not apples”