We’re lucky enough to have a Microsoft Surface where I work (Conchango). The reaction to it amongst staff, clients and – it has to be said – the cleaners has been most interesting.

For those who’ve not seen it, the form factor of the new device is a horizontal, apparently touch-sensitive screen mounted on top of a rectangular plinth that keeps it about 1/2 a meter off the ground. The only way to control the device (when running in proper mode) is using the screen itself. To worry the cleaners, the whole thing sort of glows in standby mode or features a rippling water pool. Once in fully-on mode, the device has a number of applications (still mostly at demo stage) which allow the user to interact with music, photos and other graphically-produced objects. 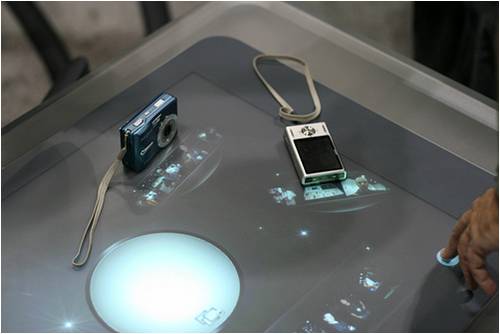 Of course, the Apple zealots mutter, ‘it’s a large iPhone’. Others are more concerned with its unmistakable tableness, although I’m pleased to say they’ve stopped calling it ‘the table’ (team email today: ‘Big pile of cakes. For Anni’s birthday. On the surface.’). Others concentrate on it’s computerness (the ‘a computer in a table’ brigade). It runs on Vista you know… and so on.

I think the truth is a little more exciting.

This is Richard’s daughter, Bel trying it out:

(and the blog entry)

Bel is four years old, and is already a fan of the Cbeebies site but find it difficult to navigate with a mouse. And what did she think of the Surface?Well, of course, she didn’t think it was a large iPhone. She also didn’t think of it as a computer. She just thought of it as a collection of objects to interact with. In one of those supercute things that three and four year olds do automatically, she even wiped he finger on her trousers when changing colour in the drawing application.

On iPhone, Windows 7 and the million other devices that will arrive on the shelves of Amazon over the coming year, multi-touch is an additional input style to complement (or replace) other input methods and devices.

For Surface, the opportunity to try something new has a few important additional elements:

The first sounds like nothing but is actually quite important. The fact that the device is horizontal forces us to reconsider much within the design space. In particular, it breaks down the concept of orientation, and it makes it much more relaxing to operate it with your hands directly (rather than via a second device like keyboard or mouse). Operating vertical touch screens by touch is tiring, and there is a limited range of interaction.

The second is not well explored yet in demo applications but is potentially the biggest shift – and that is that the device can (indeed: should) be operated by more than one user simultaneously. Traditional computers discourage this by their nature (one mouse, one keyboard, vertical screen best viewed head on). Yet how often do we collaborate on one or more machines? How often have you turned your monitored to share with someone else in the office?

And yes, it’s quite big. And that helps it to attract people in to the device.

Thirdly, because the interface is driven by cameras (not capacitive as with the iPhone), it can recognise certain objects that are placed upon it. This functionality is limited at the moment, but still it pushes our imagination. External, physical objects introduced to a virtual, computer generated space can create natural reaction, and open up possibilities for those objects that didn’t exist when they were in real life. We’ve used this to extend the properties of a physical wine bottle (to add tasting notes). We’ve seen the ability to turn a coffee cup into an air hockey paddle.

Of course, Surface points to a future of ubiquitous computing – a sort of dystopian blade-runner fantasy full of shouting billboards and walls that you type on. But actually we’re already starting to to be able to use the device to breakdown this thinking. Rather than superimpose computer-type experiences into our physical spaces, the opportunity is to extend our physical spaces using computing power. And it can be by small increments. Whatever the best application for Surface in 2009 looks like, I can tell you one thing: it won’t look like a Windows or Apple application. It will be seemless and natural, it will confuse and blend physical and virtual. It will encourage multiple people to use it at once. And you’ll be able to put a big pile of cakes on it.

And you can’t say that of your iPhone, your computer or your coffee table.

(Let me know if you’d like to come and see it at our offices).