Dear AAPL, re offer to upgrade to iTunes+ at $0.30 a song: Go fuck yourselves. I took yr stupid DRM off myself, too late to bill me now

This reminds me (a) of a great gaping void cartoon: 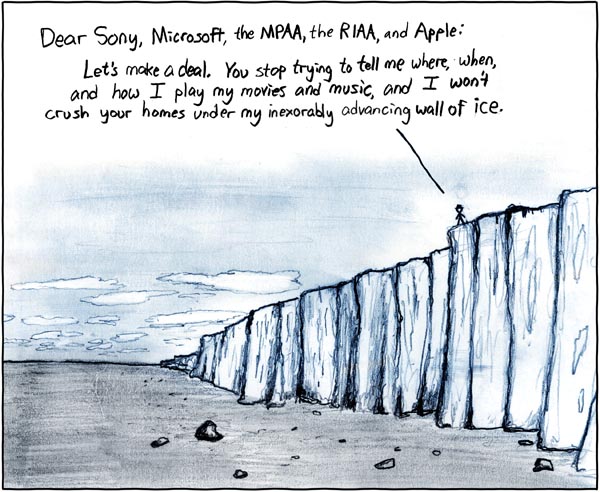 And (b) of a reductionist version of the plot of the Robert Redford and Demi Moore blockbuster. Redford says to Moore ‘Will you sleep with me for a million dollars’. Moore and that bloke from Cheers talk about it for a few days. They can use the money, it’s just the once etc etc and they decide to do it. Moore goes back to Redford and say’s ‘OK you’re on’. (This is where we diverge from the plot they actually showed in the film). Redford then says, ‘Well in that case, let’s make it $50’. Moore is shocked. ‘Well’, he say, ‘we’ve already agreed that you’re for hire (or  a less nice phrase), so now we’re just arguing about price’.

I think Shirky’s ire is slightly misdirected at Apple, who are only the middlemen in this one but the point remains the same. In this last stand in the DRM ‘debate’, the record companies admit defeat and still try and charge us more money for music we’ve often bought two or three times from them already. I still believe most users are willing to pay a reasonable price for music, but the record business will have to face up to the fact that they are not a monopoly. They are competing with a free market for identical (if illegal) products.