I’ve gotten into a bad habbit. Recently, I’ve found myself only wanting to write about topics when I can think of a good headline. Which reminds me, a new high-watermark was set by a genius in the copy-editing team at the Sun this week. A front-page banner headline relating the Jacqui Smith expenses furore (over her husband claiming for some dodgy movies on a hotel bill) reads ‘The Porn Ultimatum’. The Sun has always had great headline writers (e.g. two previous corkers associated with the John Darwin story: ‘Canoe accompany us to the station’ and ‘The liar, the witch and the wardrobe’) but I thought this was real ‘stunna’.

Anyhow, I digress. And in fact, today’s headline is acutally more of a polish than an invention. The Innovations Diaries’ post is called ‘Hieracy of Tweets’, and it came along just as I was thinking about precisely the same issue: what have a 1940s psychologist and a 21 century microblogging service got in common?

What Innovation Diaries were talking about is the psychology of twittering.  If we look at the bizarre range of stuff that comes up on the trendy microblogging site, it maps across base human desires and needs – hunger, tiredness etc – through higher-order needs such as love and belonging to the grandly named ‘self-actualisation’, relating directly to the concepts to Maslow’s famous hierachy of needs. 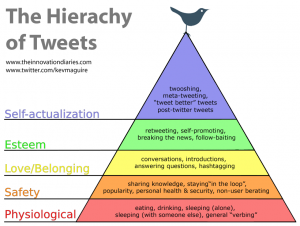 This connection is a very interesting one, although I think there’s actually more juice to it than you might get from the examples given in the diagram or in the post.

At the base of it, the needs themselves are real. It is not enough to talk about eating cake – people must actually eat it. Twitter’s not a lot of use for that (although let’s not rule it out: ‘CAKEIFY: just twitter with #blackforrestgateaux…’), but it can be of help at the other end of the spectrum where we’re talking about morality, creativity and problem soliving. So we can think about how people can directly meet the ‘esteem’ need or the ‘self-actualisation’ need through twitter rather than just reflect upon it.

This is an approach to planning and design in digital which we’ve been talking about for a while now, and there are some good examples of it in the wild. In a very real sense, people who are generating content for places like YouTube, or doing work with mashups in technology are squarely exercising their right to self-actualise (and, isn’t that a charmless phrase).

It’s also worth noting (as Innovation Diaries do), that not all of the base instincts are strictly physical, psyiological needs.  We’ve talked here in the past about Intermittent Variable Reinforcement, the addictive property which comes from plugging yourself into a unpredicatable but constant stream of updates. Modern relationships are moving towards placing a hugely increased value on ‘ambient intimacy’ in the emotional rhomboid.

People like Forrester talk about a ‘ladder of participation‘ for social media Just like the government and parents think cannabis leads to harder drug use, the analysts believe that the internet people are weaned on a diet of commenting and rating, before eventually picking up blogging and twittering. Certainly we know from building sites and things that participation does seem to drop off in accordance with required sophistication and effort.

To mix metaphors, Twitter has arrived on the ladder at an odd time. Or perhaps blogs did. I’m certainly not saying that Twitter is low-brow, although it can be. But it requires a weird mix of low involvement and high sophistication. Twitter may be the new black, or the second coming of the messiah, but its use would appear ‘lower’ down our hierachy of needs than many more expressive and creative formats. If the conservative party weren’t so busy jumping on bandwagons, or the Daily Mail knew what it was, they’d both be criticizing it for ‘dumbing down’ social media.

A revolution that started with the highest of brows (endless blogs about politics, philosophy, (marketing) and (ahem) blogs) appears to be descending towards our more reptilian insticts.

Hopefully with mainstreaming of Twitter will come a rebirth of blogs and other, richer social media – a chance to get people thinking about more than one idea at time, and in more depth.

You can’t say that in 140 characters.

1 thought on “Hierachy of feeds”