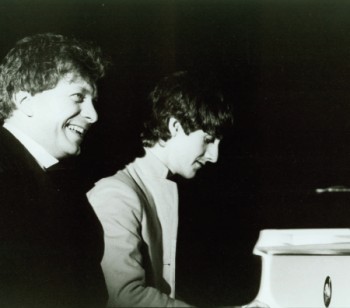 Most people got to know the inimitable Anthony H Wilson, who died two years ago, by seeing him on Granada TV, or one of the Granada shows that was broadcast outside the Manchester region, like “Other Side of Midnight” or “After Hours”. And, a whole generation got know him from the Hacienda or other Factory experiments.

I first became aware of him because we shared my favourite band. I bought their records. He released them.

Wilson’s relationship with the Durutti Column has been described as tumultuous. They were the first Factory band, unpredictable because their main member, Vini Reilly was often ill, and if not temperamental. They were never going to be stars like New Order or Happy Mondays. But Factory kept them on board until the record label itself fell to pieces. Not least because Wilson himself was a huge fan.

From the first album (‘The Return of the Durutti Column”) in 1980 (that’s Fact 14 for the Factory geeks), it was obvious that Vini Reilly could express more with his guitar (and, in that case, synths and production from the great Martin Hannett) than most bands ever would with vocals added on top. Listening to the incredibly evocative “Requiem for a Father”, or the complex “Sketch for Summer”, you are presented with whole textures and emotions that seem much deeper than the tracks themselves.

But then from the second album, LC (Fact 44, 1981), Reilly started adding vocal tracks. More and more came on successive albums, with the exception of Without Mercy (Fact 84, 1984) – a quasi-classical album Wilson had twisted Vini’s arm to make. Wilson, you see, didn’t like Vini’s singing. And they used to row about it. Throughout the years the singing waxed and waned, almost entirely absent on some albums, replaced by extensive (and at the time, novel) use of samples, on others such as (eponymous) “Vini Reilly” (Fact 242, 1989) and numerous guest vocalists. Perhaps this was Wilson’s influence, perhaps just part of Vini’s evident desire to keep on experimenting.

Although some of the best Durutti Column tracks have vocals (“Missing Boy” – a tribute to Ian Curtis, “Requiem for Mother” on the Mercury Nominated “Someone Else’s Party”), it is easy to understand Wilson’s viewpoint. Often Vini’s singing is not great (he’s said himself in interviews, “I can’t sing for toffee”), often vocal tracks become a bit of a dirge. But more to the point, when you can make music like he can, why not leave it as it is.

Well now Wilson has his wish, and much much more.

While he was dying in hospital, Reilly visited Wilson often and created instrumental snippets to take to him in hospital, responding, I guess to Wilson’s long held request to take the music in a certain direction.

The result has now been turned into a fully fledged album, A Paean to Wilson (review and details) which will be released early next year and which has been previewed already at a number of concerts in Manchester and London.

The album is an extended reflection on Reilly’s loss of a long-time friend and manager; the guy that gave him his career; his number 1 fan, perhaps. The friendship of these two – one a man often portrayed as an egotist and cad, the other a reclusive musician seems strange. But it is celebrated throughout this incredible album, which is also Reilly’s best for years.

The album starts with a loop of Wilson asking ‘Are you an artist or just a technician?’ before the intense opening beats of ‘Chant’ which drives from a broody and insistent bass line, through an aria-like melancholy to the almost club-style repetition of one sampled phrase modulating up and down, with Reilly’s guitar filling the gaps delicately. The song is like an exercise in how much space can be left in the piece of music as it drifts seemlessly between moods.

Throughout the album, Vini plays alongside long-time (and more recent) collaborators such as John Metcalf, Tim Kellet (“Without Mercy”) Poppy Morgan, and – of course – Bruce Mitchell, generating new tracks, and reprises of old tunes which jump from classical through to hypermodern; from almost over-polished form to deeply discordant and suprising.

The final track ‘How Unbelievable’, captures the outrage that Wilson felt about the inability of the (current) Labour Government to narrow the poverty gap (a sample of Wilson is used towards the end of the song). The track powers through with trade mark guitar riffs and looping vocal track repeating over an over ‘most of all, we miss you’.

As with so many Durutti Column tracks (and again, without lyrics aside from the odd sample and loop), Reilly somehow summons powerful emotion from the tracks. And this isn’t maudlin funeral music. What comes across is a deep respect for Wilson and a deep feeling of loss.

The Independent rolled their review into a broader look at albums and tracks which carry the theme of loss and bereavement. So much of the Durutti Column catalogue has been about relating feelings of loss, of sadness, and, at other times, of exquisite happiness and awakening. It is not, perhaps a surprise then that Reilly’s response to such a major loss would be so powerful.

Wilson has got so many of his wishes. Another great Durutti Column album, Reilly back on top form, and not a vocal insight. Perhaps he’ll get his other wish too, a little more recognition for the other Factory legend.